it begins with a colour...numbers! 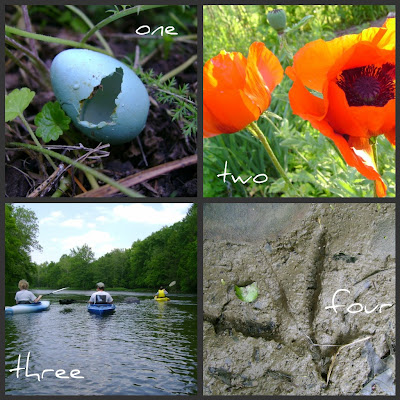 This week's it begins with a colour was not a colour at all! It was numbers. Jude and I went down by the creek early in the week and found animal tracks in the mud. The heron track reminded me instantly of counting with fingers (or toes in this case). So the hunt begin for other numbers that popped up during the week. A neglected patch of oriental poppies bloomed spectacularly this year. I'm dedicating this shot to Poppy Anne because everytime I would see them I was reminded of this inspiring blog, and the child who inspired it and this thought would pop into my head... "poppies for poppy anne". When I took the shot it was late in the day, and the light was really pretty coming from behind them. The little robin egg that hatched this blog was one. And the final shot for this collage was taken on Sunday. I only wish I could share how peaceful being on the creek was. I forgot how relaxing it is to float and see the creek from this perspective.

Email ThisBlogThis!Share to TwitterShare to FacebookShare to Pinterest
Labels: heron track, it begins with a colour, kayaking, poppies, robin egg