The number of crafting projects I try to tackle in December is a bit ridiculous for the amount of time I have to do such things. I think I understand where the idea of elves came about. I don't know how I manage to do so much in such a short period of time, and why I can't manage to spread it out over a longer period when there is not as much happening. Or for that matter why I can't be that productive at other times of the year. But I am grateful that I was able to pull it off.
As many have been doing since the beginning of the year, I am backtracking a bit to share some of the handmade gifts I created. I'm going to spread this out over a few posts, because let's just say I've already felt the shift in momentum. My productivity peaked around December 24 and its been in a free fall since. 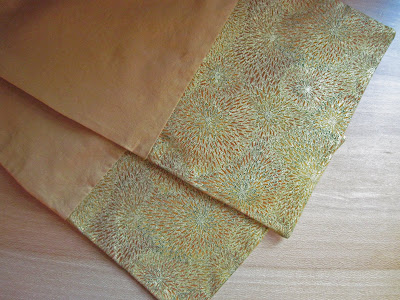 First up, a scarf that I made for my mom from a really beautiful Japanese print of chrysanthemums outlined in gold and a solid cotton. I used stitches in play's super simple scarf tutorial that I found when Heather posted a picture of her beautiful scarf and said it was super easy and super worth it. It was really simple and saved me. The fabric choices make the scarf, and while I really started off with the intention of using silk for the ends, I just had to use the Japanese print because it was so striking. 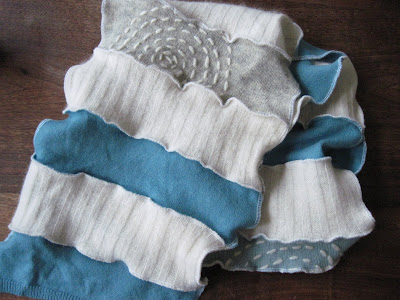 The second scarf was extremely last minute, as in I finished it the morning I was leaving to visit my family in Georgia. I made this one for Mimi, my grandmother. At first I thought I was going to go with one pearl button's easy ruffled scarf wrap, and I loved the version they made. But with my fabric choices it looked too frumpy (too much contrast between the turquoise and the off white for that design I think). So after getting to the point of sewing the ruffled edge to the main part, I cut it all up into strips and serged the pieces together. There are three repurposed sweaters in this one. The blue one is cashmere (it had holes in it). The others were thrifted with the intention of repurposing them.

So there you have it...two handmade gifts that were fairly easy to make and appreciated by the recipients. I'll be sharing some more of my handmade Christmas gifts to come in the weeks ahead.
Posted by elizabeth ~ so wabi sabi at 9:01 PM