moment of mindfulness...flowers for my soul 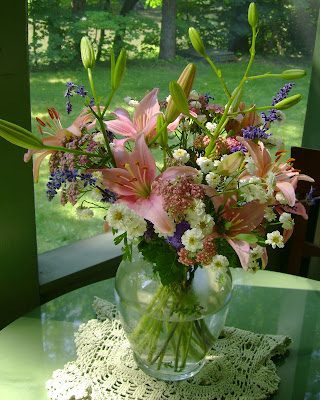 I found myself in the center of the grower’s market on Saturday counting up the ones that I had after buying everything I needed which included a chocolate chip cookie for Jude. I had five. The choice was between a beautiful loaf of artisan bread with sundried strawberries and fresh blueberries or a beautiful bouquet of soft pink lilies. I thought back to a quote I recited poorly to someone a day early, and chose flowers to feed my soul.

Many moons ago, I faced a choice with a similar outcome. The choice was to continue on to get a PhD. The major drawback to pursuing this lofty degree, at least in my mind at that time, was that then I wouldn’t be able to have a garden. In fact that’s what I remember the choice being, PhD or garden. And I chose a garden without any regrets really.

But the choice between flowers and bread had higher stakes, as the next morning I realized about two seconds after I offered Jude toast for breakfast that we had no bread. This was, of course, devasting news to Jude who has such a hard time being flexible, especially when it is first thing in the morning and it involves food (any other time of the day he'll eat anything). I was so proud of myself for not feeling an ounce of guilt or remorse when I said, “How about blueberries instead?” Thank you God for the blueberries!

This Roycrofter's quote, a take on a Chinese proverb and a quote from the Koran, has graced our mantle for 14 years.

“If I had but two loaves of bread, I would sell one of them and buy white hyacinths to feed my soul.”
Posted by elizabeth ~ so wabi sabi at 7:27 PM