moment of mindfulness... the robin's nest

A few weeks ago, we discovered this beautiful robin's nest in an unplanted window box.  A pheobe had nested there the year before, but Mrs. Robin came along and dumped the old nest off to the ground and rebuilt the entire nest herself.  We had so much fun watching this nest develop, I thought you might enjoy seeing some of the pictures we managed to take when mama and daddy were not around. 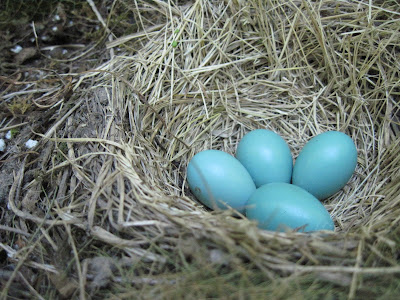 four beautiful blue eggs
It was so interesting to watch the mama bird care for these eggs.  When it was rainy and cold she would poof out her body and wings to make a large umbrella to shield the nest.  If anything came near the nest, she instantly flew off so we were really careful to stay away, but we could peak between the blind and the window and see what was happening without disturbing her. 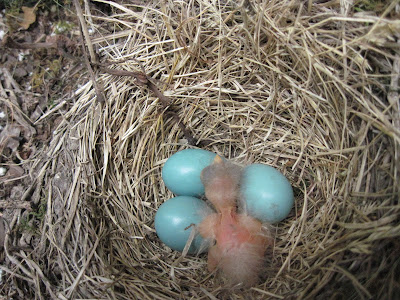 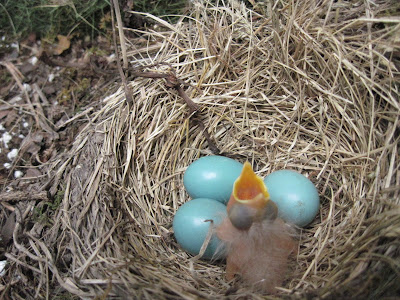 feed me
I shared this one before, but I really loved this moment.  The baby bird mistook the dark shadow of my camera for its mama and in one fluid motion that happened instantly, it flipped its heavy head back and opened its beak wide.  Who wouldn't want to give that little beak something to eat??? 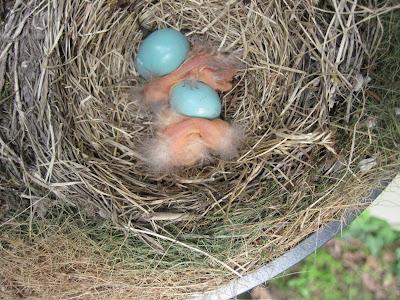 the next day,there were two floppy baby birds 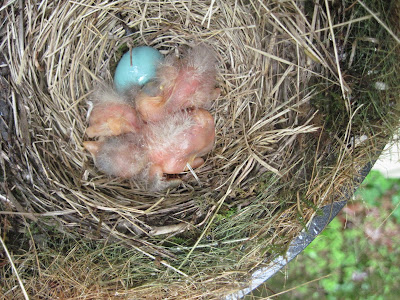 it took two more days before the next egg hatched 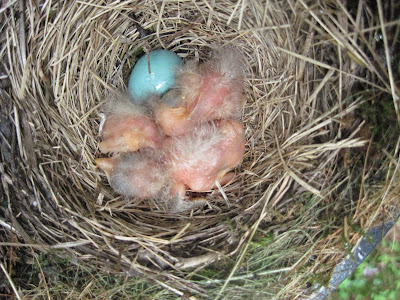 we waited and waited for the fourth egg to hatch 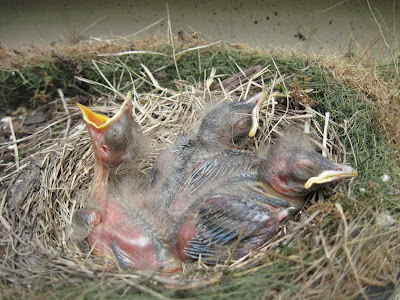 meanwhile the three baby's got bigger and grew feathers 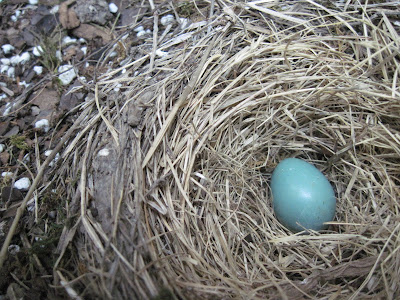 the one left behind
I didn't check on the nest for a few days, and when I did I was surprised to see that there was just one little egg left and no baby birds around.  I don't think the baby birds were old enough to fully fledge, but they may have been moved to the roost.  That is my hope at least.
A week or so later, the egg was gone.
:::
Nest usually come into my life when I have a lot of projects coming up or babies.  Right before Jude was born I kept finding nests and hatched eggs.  I even found one when I was at my midwife's house for a visit.  When this last egg didn't hatch at first I thought...wow...what does that mean?  But then I thought, how dull life would be if all your eggs hatched and you expended all  your potentiality.  When the egg disappeared I thought it represented all the dreams that might have been, if other paths were not taken.  And it turned out that a lot of things were happening in my life to help me reflect on life choices I've made in the past.  I love when nature reflects what is happening in my life.  I have launched three  projects recently...and they are off and flying.
Posted by elizabeth ~ so wabi sabi at 9:54 AM